One of my facebook friends — actually, I dare say, my favorite teacher from my days in public school — posted the following quote this evening:

The poverty of our century is unlike that of any other. It is not, as poverty was before, the result of natural scarcity, but of a set of priorities imposed upon the rest of the world by the rich. Consequently, the modern poor are not pitied but written off as trash. The twentieth-century consumer economy has produced the first culture for which a beggar is a reminder of nothing.

He attributed the statement to John Berger, and while I can neither find a definitive link to him nor a claim otherwise, I find the statement quite fitting to modern society. In other words, I don’t really care who said it if it rings true.

In particular, I think is speaks volumes as to one the main challenges to full-fledged Buddhist monasticism in the “western” world: the idea that a man who isn’t working for his livelihood deserves to be destitute and starving.

Traditionally, even in ancient times, wealthy landowners and merchants were the real champions of Buddhism in that they provided real estate, on which they maintained buildings, in which they sheltered and offered provisions to bhikkhus (and bhikkhunis, although to a lesser extent) who were training in the way taught by the Buddha. They did all of this out of faith in the Buddha’s teaching that their actions would bear good fruit for the monks as well as themselves in lives to come, perhaps even becoming the foundation for their own final liberation from samsara. There was no material reward promised to them in this life, and the monks would not somehow later invest the offerings in their local economies, yet they still made available these great gifts and sacrificed their own wealth to support them.

The world “bhikkhu,” the Pali word used to refer to Buddhist monks, literally means “Beggar,” or perhaps a little more nicely, “one who lives by alms.” The most deeply spiritual people of the time chose this lifestyle intentionally. They did not work to provide their sustenance, yet wealthy people, even kings, have supported them for many hundreds of years.

As Buddhism has grown in the west, in the United States in particular, it seems that the vast majority of the monastic support has come from immigrant communities — Cambodians, Vietnamese, Sri Lankans, etc. — that have relocated here. These are people who have come from a culture that doesn’t seem to see the world the same way Americans are brought up to see it. The “priorities imposed by the rich” haven’t sunk in so deeply there (yet). We’re so busy trying to get that next, great pleasure in our lives that we (myself included, surely) forget the needs of others even when they are blatantly obvious.

Defend the cause of the weak and fatherless; maintain the rights of the poor and oppressed. Rescue the weak and needy; deliver them from the hand of the wicked. Psalm 82:3-4

I have yet to see with my own eyes a non-immigrant monastic Sangha, and I sincerely doubt that one can take a foothold in the U.S. without a dramatic shift in our priorities and in the way we look at fellow human beings. Further, how can spirituality of any kind or tradition prevail if we see each other as obstacles, even enemies? Perhaps that is part of the objective for those who would keep developing the materialistic consumer economy to their own ends… although if that were true it would imply that they think ahead further than to their next round of personal satisfaction.

If that is so, wouldn’t the unsustainable nature of the whole thing be apparent to them?

Even if a person throws the rinsings of a bowl or a cup into a village pool or pond, thinking, ‘May whatever animals live here feed on this,’ that would be a source of merit. Vaccha Sutta

It seems to me that the wisest people in the world have had little money and few wants.

Just some things to think about. Please be well, friends.

Setting the Wheel of Dhamma in Motion

Hickersonia's Tumbler, "Udana."
Bytes of Dhamma
This page is a place to post shorter Dhamma quotes and links and links back to here when I post something that a Tumblr reader might be interested in.

Kept only merely for historical reference; my old Blogspot Page (Aug. 7, 2010 to Februart 12, 2012). Not exactly a blog on religion or anything -- more like a page of complaints. It is interesting to see how my perspective on things has changed over the years.

Scene depicting the preaching of Abhidhamma to the Devas.

Buddhist Shrine at a Vietnamese Buddhist temple in Kentucky 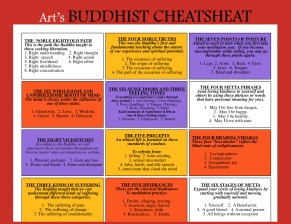 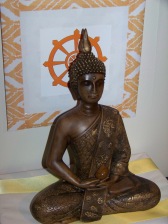 Buddha Rupa on my Shrine Table 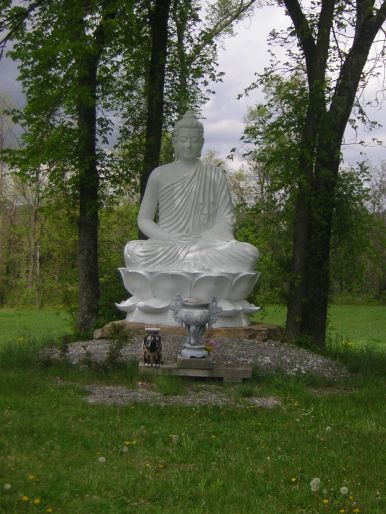 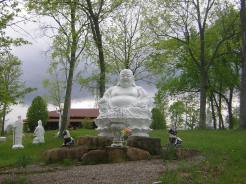 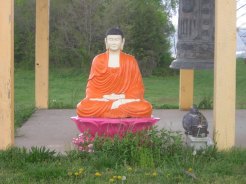 Things to Think About…

Buddhaghosa, in discussing anger said, “By doing this you are like a man who wants to hit another and picks up a burning ember or excrement in his hand and so first burns himself or makes himself stink.” Visuddhimagga IX, 23

"Little though he recites the sacred texts, but puts the Teaching into practice, forsaking lust, hatred, and delusion, with true wisdom and emancipated mind, clinging to nothing of this or any other world — he indeed partakes of the blessings of a holy life." Dhammapada verse 20

The Art of Manliness

One Man And His Mustang

An accessible guide to mindfulness meditation

Diary of an Aspiring Writer

Be kind, be compassionate

A Seeker's Journey to Transform Suffering

The universe in the form of a human girl